Danny Maurer of Elevate Nepal and Danny Giovale of Kahtoola both discovered their purpose when scaling the world’s peaks. For Maurer, it was when he first traveled to Nepal as an avid backpacker: he was moved by not only the dramatic Himalayan landscapes, but also the kindness of the Nepali people. For Giovale, a life-changing accident in the Italian Dolomites led him to invent new mountaineering gear and invest 1% of revenue into nonprofits making a positive impact.

As mountaineering, trekking, and tourism picks back up again in Nepal, we’re reflecting on what makes Flagstaff’s and Nepal’s mountain communities similar, as well as this powerful partnership between two Dannys.

Nepal and Northern Arizona are renowned for outdoor recreation. 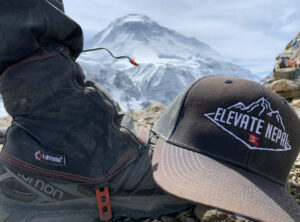 People travel from all over the world to climb Mount Everest, the tallest mountain in the world. If not climbing, visitors enjoyed everything from exploring colorful Kathmandu, visiting ancient temples, river rafting, dining on delicious Nepali cuisine and more. Prior to the COVID-19 pandemic, tourism brought over $2 billion into Nepal and created more than a million jobs. Although the pandemic isn’t over yet, the tourism industry in Nepal is showing signs of resurgence. In fact, March to May is considered the prime hiking season in the Himalayas!

Arizona is of course known for the Grand Canyon. One of the natural wonders of the world, the Grand Canyon is 6,000 feet deep and stretches across 277 miles. It attracts more than 6 million visitors every year for the breathtaking scenery, hiking, camping and river rafting—offering a valuable source of income for the state.

At least 36% of the population in Nepal is Indigenous, according to the International Work Group for Indigenous Affairs. Indigenous groups in Nepal face systemic discrimination, resulting in a loss of ancestral lands, lack of access to education and resources and exclusion from important policymaking decisions. Among the most underserved Indigenous groups are the Chepang people who live in the rugged Makwanpur District. Elevate Nepal’s Sanitation and Potable Water Project is focused on bringing clean water to this remote community.

Indigenous people have called the Colorado Plateau in Northern Arizona home for centuries, including the Navajo, Hopi, Havasupai, Kaibab-Paiute and Hualapai peoples. Like Indigenous people in Nepal, these communities have also faced a loss of ancestral land, natural resource exploitation, and systemic disempowerment. Not so long ago, Native American children were sent to Indian Schools, separating them from their families, communities and culture. The damaging and far-reaching impacts of colonization are still felt today.

According to the World Resources Report, drought, forest fires and flooding will become more severe and frequent in Nepal as climate change intensifies. One of the most troubling signs is a more unpredictable monsoon season, which puts agricultural production at risk. Intense storms in 2018 resulted in deadly flooding and landslides, destroying tens of thousands of homes, acres of farmland and miles of roads. Because of rising temperatures, mosquitoes have been found in high Himalayan altitudes for the first time, spreading diseases like malaria and dengue fever.

Flagstaff and Arizona are certainly not immune to climate change either. At the center of one of the world’s biggest ponderosa pine forests, Flagstaff grapples with the effects of drought and intensifying wildfires. Interestingly, Flagstaff has seen an increase in population due to people escaping the hotter climates of Phoenix and Tucson—skyrocketing property costs in northern regions is deemed “climate gentrification.”

Although the future of our world may look gloomy at times, the work that Elevate Nepal and Kahtoola can do together sparks hope. In today’s globalized world, we can help each other across the oceans and mountain ranges that once kept us separate. Kahtoola has played a pivotal role in Elevate Nepal projects such as:

Whether you’re a business, a mountain climber, or someone who just wants to help, here are a few ways to get involved with our work at Elevate Nepal.

Elevate Nepal, Inc. is a 501(c)(3) non-profit organization. Contributions are tax-deductible to the extent permitted by law.